Broadcasters, hurricanes and recovery in the Caribbean

Public media plays a key role in communicating essential and life saving information during times of crisis and emergency. This was no better demonstrated than during Hurricanes Irma and Maria in the Caribbean.

Accountability to the public is at the very core of public service media. Where it exists, it does so thanks to the financial support of a nation’s public. Therefore in areas prone to natural disasters, public media organisations have a duty to accurately inform their audience as to places of safety, lifesaving information and to report frequent updates during crises.

Of course, the ability to react to these events varies, often based on the level of funding, infrastructure and technology available. Japan’s NHK has one the the highest and most consistent levels of public funding, which allows it to effectively maintain multiplatform coverage during a natural disaster as well as the country’s extensive early response system. Taiwan’s Public Television Service (PTS) doesn’t have the same level of funding, but instead utilises the public’s high level of digital literacy through its PeoPo service – a network of citizen journalists – allowing the broadcaster to cover remote locations during Typhoons.

In September 2017, many broadcasters across the Caribbean were pushed to the limit with the onslaught of two category five hurricanes in the space of two weeks. Irma (the most powerful Atlantic Ocean hurricane in history) and Maria left a trail of destruction across the northern Caribbean, causing devastation in 12 out of 32 countries. To get a sense of the scale: 90% of buildings in Barbuda were destroyed, 85% of homes in Dominica and 90% of Anguilla’s electricity infrastructure and government buildings were severely damaged.

Yet despite lacking the considerable funding, infrastructure and staff numbers of larger broadcasters, public media on the frontline of Irma and Maria demonstrated incredible resilience by continuing to transmit lifesaving information to their audiences.

At Radio Anguilla, reporter Nisha Dupuis continued to broadcast throughout Irma, reassuring listeners even when the station’s systems went down and she lost contact with her own family. Speaking to CBC’s As it Happens, Nisha explained that she resorted to her smartphone, selfie stick and personal Twitter account to continue the broadcast despite her significant distress.

“We were trying to protect the equipment, protect the board, while still receiving calls from people who were in distress — some crying, some saying that their shutters were blowing off, their windows are open, their doors are blowing open and they have children in the house.”

Hurricane Maria left Dominica with at least 15 people dead and 20 missing, in what the Dominican Prime Minister described as an “unprecedented” event. 95% of roofs were blown off and phone lines went down across the island. The public broadcaster, Dominica Broadcasting Service, lost two of its broadcast towers, leaving large parts of the island without its much needed signal well into November.

Yet despite the loss of connectivity, radio still managed to prove a fundamental and robust means of communication in Dominica. As reported by NPR, Ham radios became a vital link between isolated communities with one repeater remaining active at the centre of the island. Where Ham operators had lost personal aerials, they could easily be replaced with a makeshift scrap wire.

Small island public broadcasters also offer an informative lifeline to communities in the aftermath of natural disasters. As with Radio Anguilla during Hurricane Irma, these broadcasters offer the public a space to voice their concerns, share advice, search for missing persons and update their listeners the organisation of relief efforts. 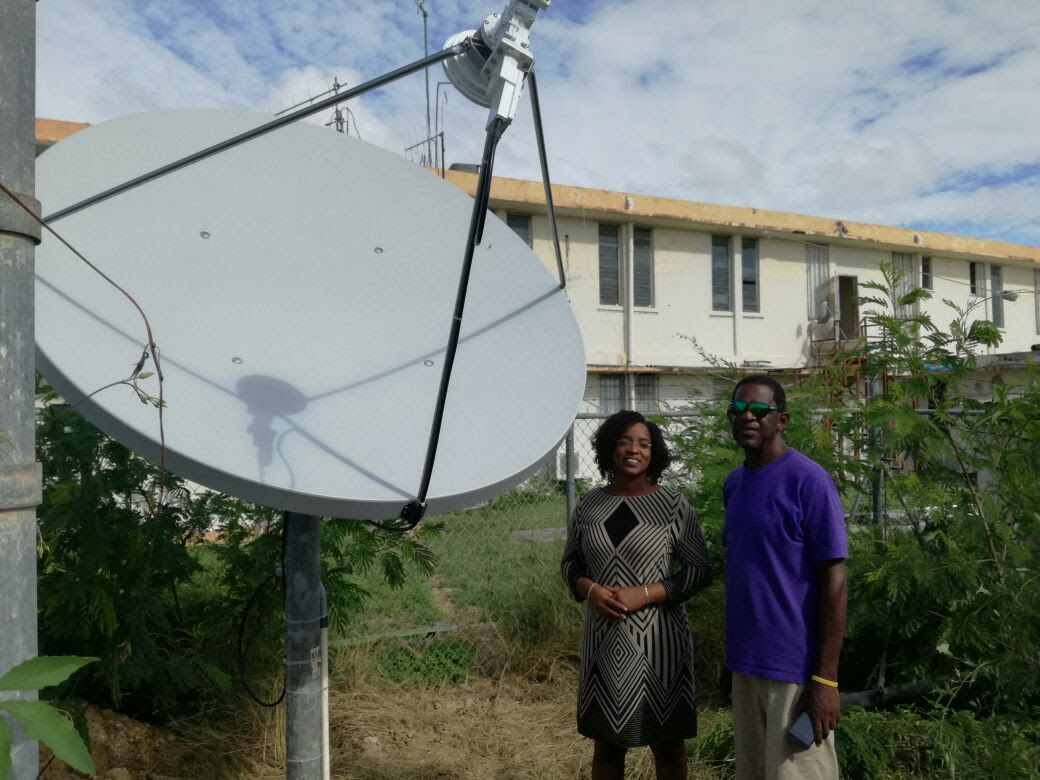 The BBC and CBC/Radio Canada generously responded to the appeal. CBC has recently provided all three stations with FM and 150 exciters as well as FM transmitters, which engineers are now in the process of installing. The BBC responded by supplying a replacement antenna to Radio Anguilla and a technician to assist with the installation.

The BBC and CBC/Radio Canada generously responded to the appeal. CBC has recently provided all three stations with FM and 150 exciters as well as FM transmitters, which engineers are now in the process of installing. The BBC responded by supplying a replacement antenna to Radio Anguilla and a technician to assist with the installation.

Loss of work equipment and personal belongings has also been a major challenge for journalists across the region, leaving many without the resources to report effectively on recovery efforts. In December the Association of Caribbean Media Workers announced that it would supply journalists in Anguilla, Barbuda, Dominica and Tortola with replacement laptops, mobile phones, digital recorders and other tools, with assistance from Free Press Unlimited and Reporters without Borders.

Puerto Rican public media is being assisted in its recovery through funds from US counterparts and the CPB, including a $75,000 fund from the Knight Foundation to the Latino Public Radio Consortium in November. According to Current the fund will go towards the delivery of generators, radio equipment and satellite phones to San Juan’s WIPR, university stations WRTU and UAGM, and community stations WOQI and Radio Vieques.

Yet despite these positive examples, the recovery of crucial information services in other areas has been problematic. In Puerto Rico, an Internews report found a substantial disparity in access to information between rural and urban areas, with only a few radio stations getting back on air by November and residents predominantly relying on word of mouth for information about relief efforts and access to basic needs, such as water, tarps, phone services and electricity. Those stations that did return to the air were faced with other challenges. WIPR-FM, in San Juan, had to rely on a generator to operate, which came at a cost of $5000 per week and the added challenge of sourcing diesel when filling stations were being patrolled by police to ration use.

The recovery effort for broadcasters across the north and east Caribbean is ongoing and these are only a few examples from a region that still faces an extremely varied and complex set of challenges. We offer our sincere thanks to our members, BBC and CBC/Radio Canada, for responding so generously to the call for assistance and to all other contributors to relief efforts in the region.

The Public Media Alliance will continue to update of relief efforts where possible, especially via PSM Weekly, which collates public media related stories from around the world.

The Caribbean Broadcasting Union, CBU joins the rest of the world in celebrating today September…

Bridgetown, Barbados. August 20, 2020. Broadcasters and other media practitioners from across the Caribbean this…