Nominations are open for IWMF Courage In Journalism Awards 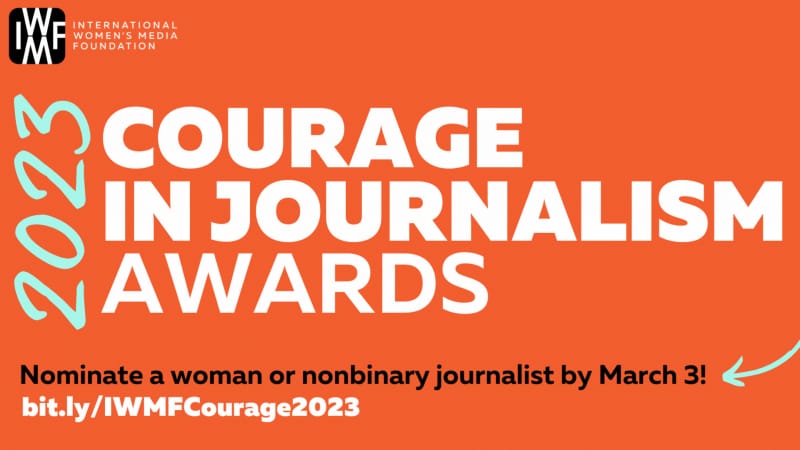 Nominations are open for all three of the International Women’s Media Foundation (IWMF)’s annual awards: the Courage in Journalism Awards, the Gwen Ifill Award and the Anja Niedringhaus Courage in Photojournalism Award.

Learn more about the awards and nomination requirements below, then visit https://bit.ly/IWMFCourage2023 to nominate and apply. Applications for all awards close March 3!

The Courage in Journalism Awards honor brave women and nonbinary journalists who report on taboo topics, work in environments hostile to women, and share difficult truths. Nominations are open to journalists from all countries who have faced significant risk while reporting.

One of our annual Courage Awards is reserved for a journalist currently imprisoned or detained in relation to their work. Learn more about the Wallis Annenberg Justice for Women Journalists Award here.

The Anja Niedringhaus Courage in Photojournalism Award recognizes a photojournalist whose work inspires us to take action and compels us to better understand the world.

Self-nomination is strongly encouraged! This award is not exclusive to conflict photography – photojournalists who produce exceptional work revealing humanity amid hostility across all beats are encouraged to apply.

The IWMF’s annual Gwen Ifill Award recognizes a woman or nonbinary journalist of color for their outstanding achievement in journalism and commitment to mentorship, leadership, and advancing diversity in journalism.

Self-nominations and third-party nominations are accepted! Candidates must be U.S.-based women or nonbinary journalists of color.

Categories
Recent Posts
Follow Us
Copyright 2023 - All Rights Reserved
Back To Top
×
We use cookies on our website to give you the most relevant experience by remembering your preferences and repeat visits. By clicking “Accept All”, you consent to the use of ALL the cookies. However, you may visit "Cookie Settings" to provide a controlled consent.
Cookie SettingsAccept All
Manage consent